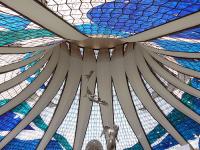 Brasilia is a modern metropolis, named federal capital in 1960. Designed and purpose-built over four years during the late fifties by the young architect Oscar Niemeyer, it is a futuristic vision of Brazil’s intent - testimony to the national slogan ‘order and progress’. From above, the city resembles an aeroplane (or a butterfly to the more romantic).

North of Brasilia is one of the biggest national parks in central Brazil, the Chapada dos Veadeiros. The 65,000 hectare park, a UNESCO World Natural Heritage site, helps to protect the flora and fauna of the cerrado: a combination of savanna dotted with moriche palms and gallery forest.