These remarkable volcanic islands are unique in the world for the richness and variety of their wildlife. Hugely influential to Charles Darwin’s theory of evolution, a visit to the Galapagos is a once-in-a-lifetime experience of nature at work.

Formed by a combination of volcanic activity and uplift in the last 15 million years, the Galapagos were first used by pirates and buccaneers as a hideaway, and have only had permanent inhabitants since the 19th century due to the harsh conditions and lack of easily-obtained water.

Whether you stay on board a comfortable boat or opt for an adventurous safari you’ll see some of the most exciting wildlife on the planet, which due to the relative lack of predators shows no fear and is easily approached by visitors. Several species are unique to the islands, including giant tortoises, fur seals, marine iguanas, flightless cormorants, Galapagos penguins (the only penguins to live on the equator) and vampire finches.

The islands’ marine life is breathtaking. There are some excellent snorkelling sites where you can swim with playful sea lions and see dolphins, penguins, rays, sea turtles, and even whale sharks (the world’s largest fish) in their natural element.

Here are some of our Galapagos highlights 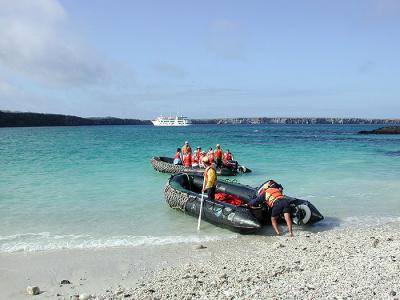 Arguably the best way to visit the Galapagos Islands is to take a cruise. There are many different boats sailing around the enchanted islands from yachts to catamarans to cruise ships with guided visits to various islands made by panga boats. 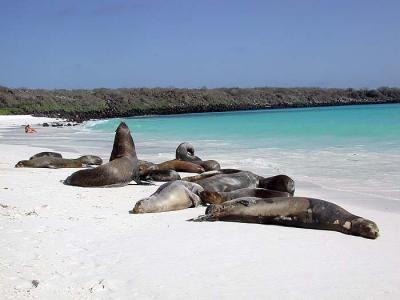 There are some stunning beaches in Galapagos and quite varied from idyllic white sand and coral to black lava. They are often deserted, save a few sealions, unless they are already out in the turquiose-blue water having fun with snorkellers. 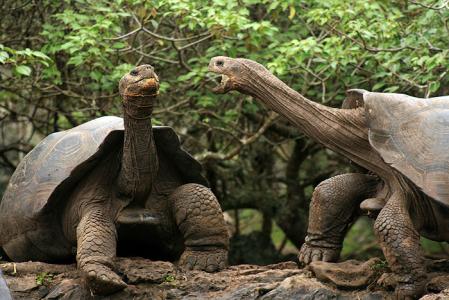 With few natural predators, Galapagos wildlife are easily approached by visitors. Some species are unique to the islands, including giant tortoises. Many have heard of (the now late) Lonesome George but there are other species and various breeding programs in place.

We had a great time. The boat itself was very comfortable with GREAT food - breakfast, then after the first dive hot chocolate and cakes, second dive, lunch, afternoon dive, tea and cakes then a 4 course dinner every night. We did 15 dives, 3 of these would be in my top ten dives ever. Hammerhead sharks so close they nearly bump into you, loads of turtles, rays, other sharks, so many fish it's like swimming in an aquarium, dolphins also but the real stars of the show were the sea lions - they love interacting with divers. On one dive I spent 20 minutes with 4 of them - they imitate you by coming up right close and blowing bubbles at you just like we have to do underwater, just the best fun I've ever had diving. We also went on land for 3 two hour walks. Ocean currents converge here which is why the diving's so good, the currents can be incredibly strong, not a place for novices!

When to go to Galapagos

The Galapagos can be visited year round as an equatorial climate is moderated by the cold Humboldt current. The warmest time is January to May (when the water is also at its warmest), while July to September is windiest, with choppy seas. During the garua season (July to November) there is often mist or haze in the mornings.

No inoculations are mandatory although you should be up-to-date on tetanus, typhoid and polio.

Given the number of visitors from around the world, meals on board Galapagos boats are very international in flavour with a wide choice of menu. Food on the islands is much more simple, due to the logistics and cost of produce being brought in from the mainland.