Pristine in its isolation and dramatically beautiful, Antarctica is covered in perpetual ice several kilometres thick. Its freezing waters teem with spectacular wildlife, pursuing a frenzied race to breed during the four short months of summer.

It takes several days to sail from Cape Horn to the Antarctic Peninsula, crossing the notorious Drake Passage in the wake of great polar explorers like Scott and Shackleton. No-one who experiences this extraordinary journey will forget their first glimpse of ice so dense it looks blue, the sheer walls and flat tops of huge tabular icebergs, massive ice shelves and glacial valleys, against a backdrop of mountains that have never been climbed.

Intrepid adventurers can paddle a kayak through the narrow channels between ice floes or camp ashore in the immense emptiness of an Antarctic night, falling asleep to the sounds of wind blowing and ice cracking.

Wildlife watching here is outstanding - sea birds, whales, dolphins and seals attracted by the millions of krill that stock the oceans in abundance. The Falkland Islands (Islas Malvinas) are home to vast colonies of penguins, raising their chicks on white sand beaches, albatross, sea lions, orcas and elephant seals. Longer cruises can include South Georgia, a protected marine ecosystem of exceptional biodiversity with the largest king penguin rookery on earth.

Here are some of our Antarctica highlights 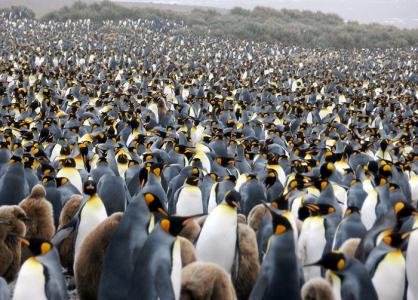 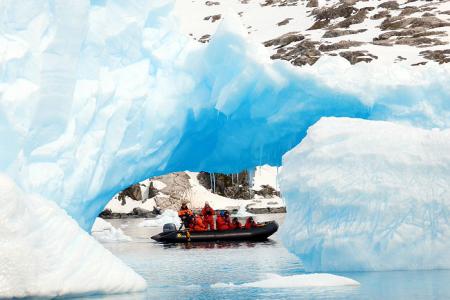 Marvel at the icy blue structures floating along silently, each sculpted by the elements highlighting nature's grandeur. Antarctica is like no other place on earth, hauntingly beautiful and simply stunning. 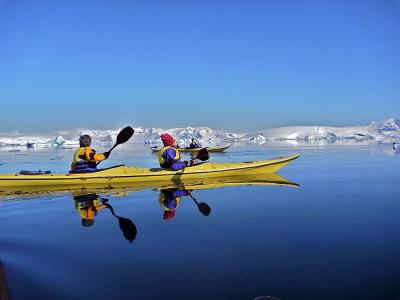 Kayak around peaceful bays through narrow channels, admiring the icebergs and playful penguins. The more adventurous may like to try camping on the uninhabited white continent itself, an experience like no other.

Thank you for a fantastic holiday to Antarctica. We enjoyed everything and all the organisation was excellent. The Quark personnel and Orlova's crew were fantastic. I would strongly recommend that anyone going to Antarctica includes the Falklands and South Georgia.

When to go to Antarctica

The season runs from November to early March. Each month has its own special and often unique highlights:

In November the spring ice begins to break up, creating sculpted new landscapes of pristine icebergs with abundant pack ice. This is the courting season for penguins and sea birds, with whole colonies in spectacular displays of courtship rituals. Seals are visible, spring flowers bloom on the Falklands, and beautiful sunrises and sunsets create stunning photographic opportunities.

December and January are witness to wildlife in full swing as temperatures and activity levels rise and days lengthen. On South Georgia and the Falklands the first penguin chicks emerge and fur seals are breeding. Whale sightings increase as receding ice opens new channels for exploration. February is already late summer in Antarctica: whale sightings are at their best, penguin chicks begin to fledge and the receding pack ice permits forays further south. Snow algae blooms, chicks leave their nests and fur seals are increasingly common on the Antarctic Peninsula.

fly direct to the peninsula and cruise between the western coast and the South Shetland Islands.