The Falkland Islands (Islas Malvinas) are in the South Atlantic ocean, approximately 300 miles east off the Argentine coast (a one and a half hour flight from Punta Arenas in Chile). The islands are a self-governing Overseas Territory of the United Kingdom, independent except for defence and foreign affairs (which remain the responsibility of the British Government). The people are mainly of British descent and traditionally live in small sheep farming communities.

The rich waters surrounding the Falkland Islands attract spectacular birds and wildlife, particularly penguins. King, Gentoo, Magellanic and Rockhopper penguins all breed on the islands (and you may also see Macaroni penguins). Sharing the white sandy beaches with the penguins are elephant seals and sea lions. There are also 200 species of birds, ranging from the tiny tussac bird to the black-browed albatross. There are also many striated caracaras (Johnny rooks), which are very rare elsewhere. Porpoises and dolphins are often seen in the bays, as are whales. Diddle-dee berries are endemic: these tiny, red, bittersweet berries grow on the Diddle-dee shrub which bears fruit in the autumn, and are often used to make jam.

Fishing in the Falklands is very rewarding. The native mullet can grow to over 20lb; brown trout were introduced to Falkland rivers in the 1940's and quickly established themselves - catches of over 10lbs are common - especially for sea trout. There is a resident zebra (or Falkland) trout which is protected. The trout season runs from 1 September to 30 April, and most areas operate a catch-and-release policy.

LAN fly to Mount Pleasant from Santiago via Punta Arenas once a week, on Saturdays only. The MoD also operates twice weekly flights from RAF Brize Norton in Oxfordshire.

Getting around the islands by air is with FIGAS' (Falkland Islands Government Air Service) 10-seater aircraft. On most islands there is only one place to stay, usually with limited rooms.

Here are some of our Falkland Islands highlights 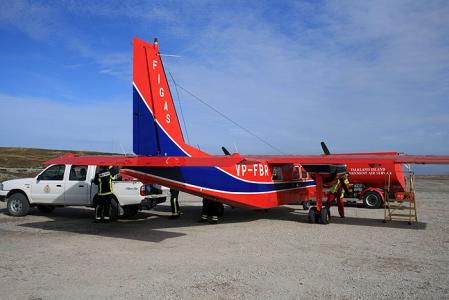 Each of the islands has its own draw cards, from Saunders Island, the site of the first British settlement, to tiny Bleaker island, just 12 miles long. Hop between the islands on the small local planes - wonderful views and unique landing strips! 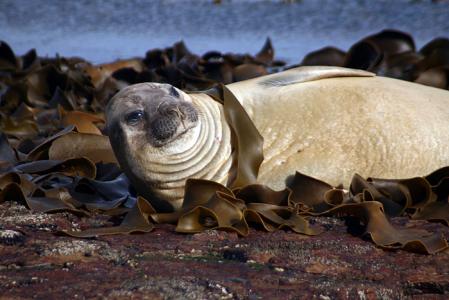 It's not just penguins you'll find in the Falklands, Sea Lion Island is home to colonies of elephant seals and sea lions. If your timing is right you may even spot pods of killer whales (orcas) circling the island looking for pups. 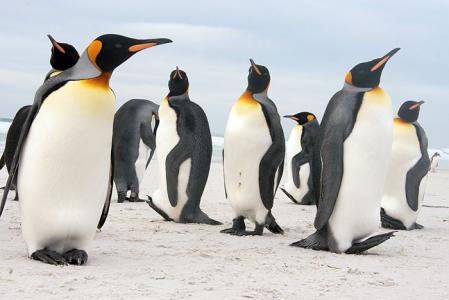 The impressive Volunteer Point on East Falkland is the largest most accessible king penguin colony. Thousands of adult penguins and several hundred chicks jostle for space amidst the few visitors who make the trip here.

The Falkland Islands were absolutely, unbelievably, utterly and completely amazing. They were the highlight of our holiday and we wished we had had two weeks there instead of one. The wildlife just has to be experienced to be believed. A definite case where man is second to nature and is quite happy to be so. The accommodation was also excellent, even the wooden hut in the middle of nowhere on Saunders Island which we had to ourselves. As for the penguins, they were pure characters. We managed to see all five Falkland Island species, each one having their own characteristics. The albatross were also amazing, they were so content just to sit on their nests with you sitting a couple of feet away. I must also say a thank you to all our guides, we learnt so much in only one week.

When to go to Falkland Islands

The best months to visit are October to March. The climate is cool and dominated by westerly winds - long periods of calm are rare except in winter. The height of the summer is when it is windiest, but days are longer. The Falklands are the same distance from the south pole as London is from the north pole but on average enjoy more sunshine than the UK. While the weather can be unpredictable temperatures vary little throughout the year.

No innoculations are required to visit the islands but visitors travelling on RAF flights are recommended by the Ministry of Defence to be innoculated against yellow fever in case the flight has to be diverted to a risk area.

Not required for most EU and US citizens for a 1 month stay.

The local pound (£) is on par with sterling and UK notes and coins are legal tender. All major credit cards are widely accepted in Stanley but there are no ATMs on the islands.

The local telecommunications provider is Cable and Wireless. Mobile coverage extends only to some parts of East Falkland.

cruise around the peninsula, admiring the abundant wildlife of the Falklands and South Georgia