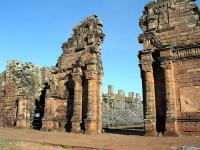 Misiones province, which takes its name from the missions built by the Jesuits in the 17th century, is widely forested and is where most of the tea-like drink known as mate is grown. The best preserved of the missions is San Ignacio Mini, about 250km from Iguazú, but there are several others nearby whose crumbling stone walls emerge from luxuriant jungle vegetation.

All hotels in Misiones →