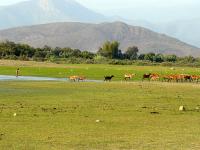 Founded in 1560 by Spanish priests, Chiclayo has one of northern Peru’s largest daily markets. From here one can explore the pyramid complex that contains the tomb of the Lord of Sipán, and the vast ruined city of Túcume, believed to have been built over a thousand years ago.

Coastal Trujillo has superb colonial architecture and fascinating pre-Columbian ruins. Near Trujillo is Chan Chan, built by the ancient Chimu culture and the world’s largest adobe city. Also nearby are the step pyramids that comprise the Temples (huacas) of the Sun and Moon.