You are here: Home » Mexico » The Copper Canyon
Enlarge map 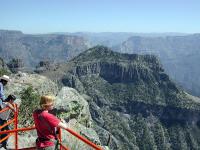 The largest canyon in North America, the Copper Canyon is nearly four times the volume of the Grand Canyon (and far less visited) and is a vast network of gullies, gorges and mountains set amongst pristine wilderness and villages and towns very much off the beaten path. Los Mochis is a gateway city on the Pacific coast and is the final western stop of the Chihuahua-Pacific railroad (known as El Chepe), considered one of the world's most scenic rail journeys. The train crosses 36 bridges and passes 87 tunnels along its 655 km route from Mexico’s interior to the Pacific coast.

All hotels in The Copper Canyon →