You are here: Home » Mexico » Puebla and Oaxaca
Enlarge map 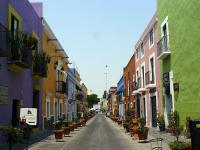 Puebla, or City of the Angels, is one of Mexico's oldest cities, founded in 1531 by Fray Julian Garces who apparently saw angels in a dream indicating where the city should be built. 2 hours east of Mexico City, it is a charming colonial city, now a UNESCO world heritage site, particularly popular at weekends. Talavera tiles are a main feature of the architecture which consists of both Renaissance and Mexican baroque buildings and structures, many of which are painted in bright blues, reds and yellows. There are said to be 365 churches, many interesting museums, a lovely main square surrounded by restaurants and cafes, and the Cathedral is noted for its marble floors, gold leaf decoration and very tall bell tower.

Oaxaca was founded in 1521 on an earlier native site. The ‘City of Jade’ is a blend of native and colonial past, with fine stone buildings set around the impressive zócalo (main square), colourful markets and delicious regional cuisine. The Zapotec sites of Monte Albán and Mitla are nearby. Oaxaca’s cultural roots are particularly evident during the Guelaguetza festival celebrated each July, a beautiful display of costume, music and dance performed by local groups.