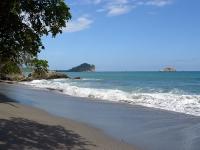 Playa Jacó is one of the country’s most popular and developed seaside destinations less than two hours’ drive of the capital. It is home to Costa Rica's best surfing and despite its popularity retains a laid-back atmosphere.

Midway along the Pacific coast is the very popular Manuel Antonio National Park, with forested hills and swamps, two beautiful beaches and fine hotels. It is home to many birds, iguanas, snakes, sloths, and capuchin monkeys.

Uvita started out as a small fishing village on the south Pacific coast but has been made famous by its beautiful beaches, exclusive hotels and extraordinary marine life in the Marino Ballena national park. It is one of the best places in Costa Rica to see migratory humpback whales (July to October and December to March), a variety of species of dolphins, and sea turtles. The Whale’s Tail beach, which at low tide makes the perfect outline of a whale tail, is quite spectacular.

All hotels in Manuel Antonio and Uvita →