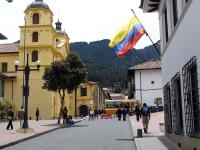 Colombia’s fertile highlands have been heavily populated since pre-Colombian days. Santafé de Bogotá, the capital, was founded in 1538 and lies at about 9,000 feet. The old centre, known as La Candelaria, still preserves fine colonial architecture and historical buildings such as the cathedral; Casa de Moneda (mint); palaces, churches and convents.

A funicular railway and cable car lead up to Monserrate hill, with fine views. North of the city, the famous Salt Cathedral at Zipaquirá (built in the old tunnels of a large salt mine) is well worth a visit, and Lake Guatavita was one source of the El Dorado legend: a ceremonial site of the Muiska Indians where gold and emerald ornaments were thrown into the water.