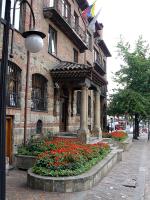 An impeccable smaller hotel in the number one gastronomy area of Bogotá. Originally a private home, the hotel has been beautifully converted into a charming hotel which was taken over by Four Seasons in late 2015. The rooms are split across the original building and the more modern extension, maintaining a classic, traditional style throughout. There is a restaurant, gym and spa, and many of the city's most fashionable restaurants are within easy walking distance.

62 rooms in total split between the front of the building (the older colonial section), where rooms have character and style (some also have fireplaces) and the more modern extension at the back, where the rooms tend to be slightly more spacious and quieter, but have less character.

A charming colonial hotel, in a city of predominantly business hotels, which offers character, style and excellent service.