skip to main content
You are here: Home » Articles » Waterfalls and moai - Claire in Lima, Iguassu and Easter Island 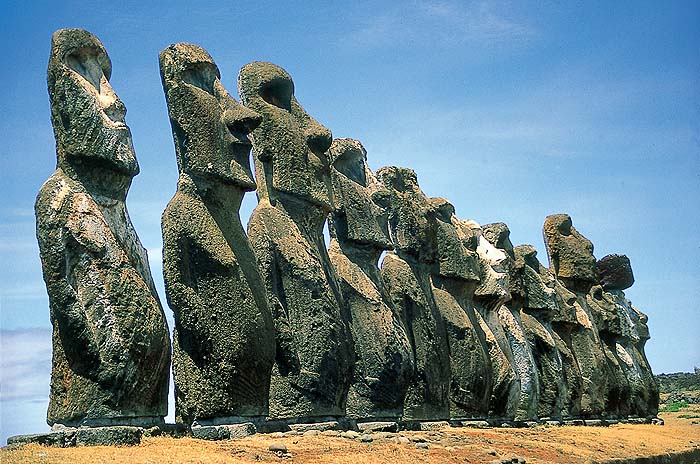 Waterfalls and moai - Claire in Lima, Iguassu and Easter Island

At the end of March I flew on a whistle-stop tour of South America, inspired by new LAN flight routes from Lima to Iguassu, and also Lima to Easter Island.

In Lima, I visited the Pachacamac ruins (‘Creator of the world’ in Quechua). Pacha Camac was the deity worshipped on this site by the Ichma before the arrival of the Inca. An excellent couple of meals later (lunch at La Rosa Nautica, a long-established favourite on the pier and dinner at La Huaca by the Huaca Pucllana ruins) and we were heading out on the morning flight to Iguassu.

Macaws in the Bird Park

For my first time on the Brazilian side of Iguassu falls, between hotel inspections, presentations and workshops I did manage to get out and see the famous falls, including a really close-up view on the Macuco Safari boat trip which was an exhilirating (and wet!) experience. We also visited the nearby bird sanctuary, a charming zoological experience, great for families and Itaipu dam, impressive and great for energy enthusiasts!

On my return to Peru we were greeted once again with open arms by the charming Peruvians. After a morning presentation and workshop at my hotel, we were able to see a fantastic Peruvian Paso horse show at Hacienda Mamacona, twenty minutes outside the city, do a quick city tour, and spend a couple of hours in the Larco Herrera Museum. This holds a fascinating treasure trove of over 45,000 artefacts, magnificently displayed and explained. All this before catching an overnight flight to Easter Island.

Easter Island, so-named after its (so-called) discovery on Easter Sunday 1722 by Dutch explorer Jacob Roggeveen, has long been on my list of places to see before I die and not one which I envisioned ticking-off at any time in the near future, so I was absolutely delighted to find myself there so soon. Rapa Nui is stunning, and you certainly come away with more questions than you start with. The whole island is an open air museum and the mystical moai (stone statues) are so impressive close-up. I was among the lucky few who got to stay at Explora, by far the best hotel on the island - pure luxury without frills. The islanders really pulled out all the stops to give us a proper welcome, from the moment we arrived at the airport and were met with garlands of flowers the service was tip top; complete over-indulgence.

At Orongo we were finally told the story of the Tangata Manu (bird man) a term with which we had been teased throughout our stay.

In the years after the destruction of the statues, Easter Island found itself at its lowest point and having lost all faith in the Moai culture, sought a new religion. Enter the bird man cult. Once a year islanders would congregate on the sacred Orongo site to witness a bizarre contest: the young men of the village would put themselves forward to swim across the shark-infested waters to nearby Motu Nui island and the first to collect an egg from this island and return (climbing the 300m Rano Kau cliff in order to arrive) would be crowned winner. The egg had to be handed to the victor's chief who would then be appointed leader of the community for the year. Meanwhile, the bird man himself lived for a year in complete isolation from Easter Island society with a bride of his choice. His bride he would choose himself from a selection of virgins who would each have spent the previous few months living in caves in order achieve the palest skin possible (white being hailed as a sacred colour on Easter Island). The cult was still going strong in the 1860's when Christian missionaries arrived in Rapa Nui - they soon suppressed this ritual.

We all struggled to leave the enchanting Rapa Nui, but had an enjoyable couple of nights back in Lima before the final leg of our journey. We had the chance to take a boat out to the Palomino Islands and jumping off the boat to swim with the sea lions (of which there are thousands) made the perfect end to an incredible trip.

How much of our holiday payments do you spend on your own luxury holidays?
Comment by: m rose on 2 May 2011 14:03
Thank you for your comments regarding our familiarisation trips - a very good question! We are very fortunate that many of our trips are hosted by airlines (in the case of Claire's trip LAN were very keen to show us their new routes from Lima to Easter Island) and we receive an exceptional amount of assistance from tourist boards and complimentary rooms from the wide range of hotels we work with so that they can show us the best of their countries. They all realise that it is essential that tour operators gain first hand experience of their countries and different hotels so we can in turn sell their destinations to our clients and give honest, sound advice and a first hand account of what each area/country is like - which usually entails travelling to a new region each day, changing hotel every night and many hotel inspections throughout the trip. Last Frontiers prides itself that between the team here we personally know all the hotels we offer and can compare different hotels in each area to recommend the best hotels to suit our diverse client spectrum.
Comment by: Tracy Mendelsson (Last Frontiers) on 3 May 2011 11:24