skip to main content
You are here: Home » Articles » Walking into a postcard - Jonny in Cuba 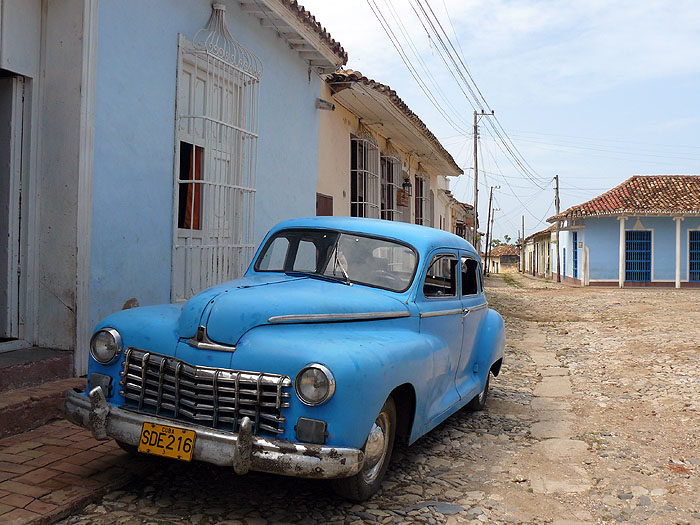 Walking into a postcard - Jonny in Cuba

In June I was lucky enough to travel to the island of Cuba, famed for its cigars, vintage cars and of course the iconic figures of Che and Fidel. It was somewhere I had always wanted to visit, and I was keen to discover if the romantic image I had in my head of the island (helped by Graham Greene’s novel, ‘Our man in Havana’) - was in fact accurate, or merely a myth. Arriving in Havana was like walking into a postcard; Buicks and Plymouths lined the potholed streets, cigar smoke filled the muggy air and crumbling buildings were everywhere I turned. It was exactly how I expected it, and I couldn’t wait to explore this enigma of a country.

My first stop was the capital Havana, the hub where all flights from the UK arrive. Although considered a year round destination, (June to August is particularly humid) it’s generally best avoided between August and December, the hurricane season in the Caribbean. Havana has a rich history, and there is no better way to pass the time than wandering the cobbles of the old city, quenching your thirst with a daiquiri at La Bodeguita del Medio (Hemingway’s Bodega) and watching the slow pace of Havana life pass by. Cuba has seen a growing number of visitors over recent years, resulting in the expansion of the tourist industry and the emergence of a private sector. For the tourist this means there is now a wider choice of hotels and restaurants to choose between, which has led to an improvement in quality.

The focus of my trip was central and eastern Cuba, and my second port of call was the eastern coastal town of Guardalavaca (around 1 hours’ drive from Holguin, a short flight from Havana). The Bahia de Naranjo National Park is a stone’s throw from Guardalavaca, and is popular with ornithologists and has a number of nature walks; certainly worth visiting for those looking to venture to the east of the island.

Three hours west of Camaguey and an hour from Trinidad is the colonial town of Sancti Spiritus, a perfect stop-off for lunch and a chance to stretch your legs when travelling between the two cities. Sancti Spiritus is one of the original seven cities founded by the Spanish in 1514, and is home to the oldest church in Cuba, the Iglesia Parroquial Mayor del Espiritu Santo. The panoramic views over the city from the top of the bell tower are well worth the nervy climb up the wooden ladders to the summit. Across the road is the simple yet delicious, state-owned restaurant, Meson de la Plaza; the garbanzo soup, (chorizo, chick peas and ropa vieja - shredded beef) is particularly tasty and is served in a ceramic tapas dish, for added authenticity.

My next stop was Trinidad, a UNESCO World Heritage Site, where horses and carts amble down the cobbled streets and locals sit on the pavements drinking canchanchara (rum, honey, lemon juice and water). For those wanting to perfect the art of salsa, a visit to Casa de la Trova is a must. The Trovadores, (after whom the houses were named), were travelling musicians who sang and played their instruments; the Casa de la Trova was the house where they performed. The houses can now be found in most towns and cities across Cuba – they’re a great place to socialise, indulge in a rum or two and show off your two left feet to the locals.

On the outskirts of Trinidad is the Manaca Iznaga sugar plantation. Sugar was once a thriving industry in Cuba and one of its main exports. The plantation ceased to operate however, following the abolition of slavery, but the watch tower and owner’s house have been remarkably well preserved. If you give the guard at the bottom of the tower some small change, you can climb the 147 foot structure - it’s not an easy climb, but the views are worth it. A word of warning though- watch out for bat droppings. Behind the owner’s quarters, there is a wooden sugar press, where you can try your hand at pressing sugar cane, and even taste the end product.

From Trinidad I travelled west, making the short journey to the port town of Cienfuegos, known as La Perla del Sur (the Pearl of the South). Leaving behind the flagged streets and crumbling buildings of Trinidad, I now entered a city with a much more modern (and European) feel. A visit to the Tomás Terry theatre is a good way to spend an afternoon; built in 1895 to honour the Venezuelan industrialist, the theatre has all its original decorations and furnishings. It is open daily for tours, and shows at weekends. For lunch, a good choice is the Palacio de Valle, an Arabic styled building, built to honour the sugar baron Oclico del Valle Blanco.

My penultimate stop was the town of Santa Clara, made famous by Che Guevara’s decisive victory in 1957 over the then dictator Fulgencio Batista, forcing the leader into exile. To celebrate this triumph and honour his death, a huge statue of Che was erected on the outskirts of town, where he was reburied in 1997. For those interested in the history of the Cuban revolution, a visit to the monument and museum (just behind the statue, but not open on Mondays) is extremely interesting.

I ended my whistle stop tour on Cayo Santa Maria, off the north coast of Cuba and connected to the mainland by a single carriage road. The water lapping the white sandy beaches of the cayos is crystal-clear, perfect for snorkelling, fishing and kayaking. For visitors who prefer dry land, there are nature walks, as well as sports facilities (a number of the resorts on the Cayo have tennis courts) to keep you occupied. The quickest and easiest way of returning to the capital is to fly directly from Cayo Las Brujas airport, to Playa Baracoa, on the outskirts of Havana, which makes it a relative simple addition to any Cuba trip.

Cuba was certainly like nowhere else I had visited in Latin America. After initially feeling like I had walked onto a film set, I soon became used to the Cadillac’s and the sight of men puffing away on huge cigars. Although small in comparison to other countries in Latin America, the diversity which the island offers from one area to the next made for a fascinating trip.