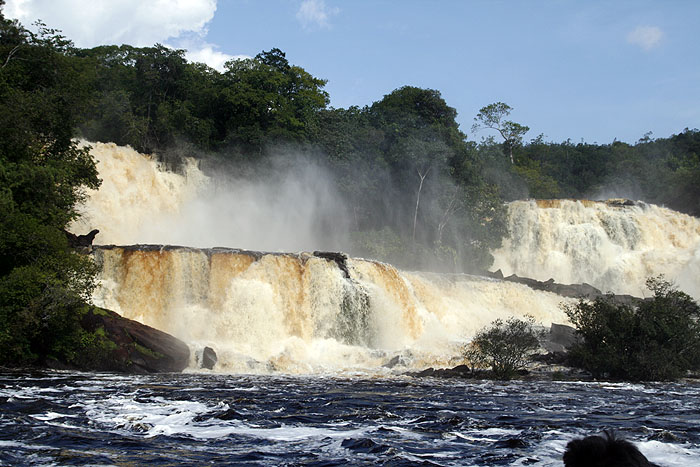 They told me I had to see Angel Falls before I died. Fine - but I didn't realise they meant immediately before.

The Cessna we take to get there gives me the collywobbles from the moment I climb in. It isn't because there are six of us crushed inside, including a Giant Haystacks lookalike whose buttock cleavage alone must exceed his 10kg baggage allowance.

It isn't even the pilot's control panel, lifted from my dad's Austin Maxi circa 1979. It's the sight of another Cessna beside the runway, not so much parked as scrunched, a mash of silver and white metal that they swept into a ball sometime after the crash but haven't quite got round to clearing away.

Enrique the Pilot, though, looks reassuring - late fifties, silver hair, grandfatherly smile. Appearances can be deceptive. There is a piercing squeal like the sound of a human head scraping along tarmac, then we're airborne, juddering into the Devil's Canyon, with a drunken lurch every time Haystacks adjusts his piles.

The terrain outside the Cessna is mind-blowing, like Monument Valley after someone's gone mad with the Miracle-Gro. On all sides, weird sandstone skyscrapers sheer up out of the plain. These are the tepui, the enigmatic flat-topped mountains that inspired Conan Doyle's dinosaur-hunting classic The Lost World. Jungle drips from every cliff and crag, black eagles surf beneath our wings and every so often a waterfall dangles gauzily off the side of the gorge, delicate as lace.

I see all this, but I don't feel it - not in the exhilarated way one would hope to experience a wonder of the natural world. That's because of Enrique the Pilot. Enrique has gone insane.

He swings and flips the Cessna into the pink jaws of the ravine, hurtling towards the rock face like a doomed mozzie at a windscreen. I don't know how close our wing tips get to the tepui walls, but when we reach Angel Falls, it's close enough for me to see blue sky behind the 3,000ft spire of water.

I can't scream, because I'm a man, but this, I'm afraid, is when I start to pant like a dog. Perhaps Enrique hears me, because suddenly he turns his head - and there's a Jekyll and Hyde moment, the one when Jekyll emerges from behind his lab bench with hairy hands. Enrique's face is twisted into a rictus grin, and he lets out the unmistakable chortle of sheer psychotic derangement. Ten minutes ago, he was as sensible as Peter Sissons; now, he's wilder than Tracey Emin. Oh God, now he's leaning across Haystacks and throwing open the window..

VENEZUELA IS a nation of superlatives: as well as the world's tallest waterfall, it's got the largest snake, the highest cable car, the biggest ice-cream parlour, the barmiest president. But the allure of Angel Falls is not just that they are 18 times loftier than Niagara. It's also the Ripping Yarns folklore that surrounds them.

This began in 1935 with another Cessna, piloted by Jimmy Angel. He was a first world war pilot, Hollywood stunt flyer and twinkle-eyed gold-hunter who came to Canaima looking for the fabled city of El Dorado, but instead discovered the longest bit of vertical river on Earth. Angel crash-landed his plane on the summit of Auyantepui, near the plunge-point of the falls, then spent 12 days slashing his way back to civilisation through virgin rainforest, accompanied by his wife, Marie, whom he probably carried under one arm.

Canaima's early visitors also included a Russian prospector named Anatoly, who gave up his gold-lust for a career as the neighbourhood witch doctor, and Tomas Bernal, a Peruvian hermit who lived for 10 years in a cave he hacked out behind the Sapo Falls.

You can see at once why they went native. This is a landscape built for heroes, and you feel the epic sweep of it the minute you arrive, dipping in from Caracas the way those early adventurers did. Clouds race your plane across the tepui plateaux like chariots, and as you buzz lower, you see the Carrao River chucking itself over a precipice and detonating into four more supernaturally fierce waterfalls. They meet in the Canaima lagoon, boiling like Comrade Anatoly's cauldron.

The settlement by the lagoon is half tourist camp, half indigenous village: no roads in, just a handful of hammock-strung lodges linked by Jaffa-orange sand roads, deep in the throb and fizz of the jungle. Waku Lodge, where I'm staying, is newish, and a cut above the rest - a row of shanty-chic posadas in a tropical garden right opposite those incendiary falls.

Despite the Cessna fly-past, I don't feel I've seen Angel Falls to best advantage: I was too busy squeezing my heart between my knees. So the next day I'm up at 4am, casting off in the dark for a day-long adventure to the foot of the cataract by native canoe.

Our boat is powered by outboard, but the scorch marks prove it's a proper curiara, burnt out of a single mammoth cedar. As we skim through the mangroves, a Turneresque dawn breaks, and fat pink clouds pummel the tepui like boxing gloves. Metallic-green kingfishers flicker above the boat, and Jose, our guide, points out where Steven Spielberg shot the opening sequence of Jurassic Park - no CGI required.

It's 30 miles upriver to the falls and, as we tunnel deeper into the Devil's Canyon, the river becomes slowly more sinister, wreathed with mist olive green. Every twitch in the surface makes me think "anaconda". There are hidden currents here; the canoe might overturn, and slaloming up through the rapids feels like taking a backwards ride on a log flume. "This river is a traitor," says Jose darkly. "It is not a river you can trust."

At 11 o'clock, we disembark under the castle-like bastion of Auyantepui, the "Hell Mountain" of the Pemon Indians, for the last act of our expedition - an hour's trek-cum-scramble to the falls. The track through the rainforest is lurid, thick with humidity and disco-light colours. We balance across precarious branches and paddle through creeks. If anyone flags, Jose adds a frisson of extra theatre by telling a story about the snakes and spiders that scurry here: the bushmaster he speared through the head, still wriggling two days later; the "24-hour ant", whose bite means a day of agonising pain.

Suddenly, we emerge into the sun-glare of Mirador Laime, a kind of rocky royal box above the ravine - and there is the waterfall, blasting straight up into the clouds. Except that you can't see it all, because it's too big for the human viewfinder: I have to scroll my eyes up and down to take it in.

But that's not the really enthralling part. What's remarkable is that you can see water behaving in a way you've never seen before: the physics of the cascade become visible. For the first 200ft of its descent - the first Niagara, say - the waterfall sticks together in traditional style. Then it breaks up, and becomes a series of separate white fireworks shooting to earth. Another 500ft, and it is spiralling into ringlets. Another 500ft, and it has turned to dust, atomised, and it's frothing out in all directions, spray from a can. Some water never makes it to the bottom at all, but flutters in smoke rings across the face of the tepui.

It's two or three minutes before anyone speaks. "The Pemon believe evil spirits inhabit the waterfall," says Jose at last. "If you get too close, they will leap out and snatch your soul. I think it's not hard to understand why they believe it is alive."

Go there: Last Frontiers (01296 653000, www.lastfrontiers.com) has a 12-day Venezuela trip, including three nights at Waku Lodge, from £2,110pp, including flights, most meals and a canoe trip to Angel Falls.

Canaima's waterfalls are most spectacular between May and October, but avoid the heavy rains of July and August.