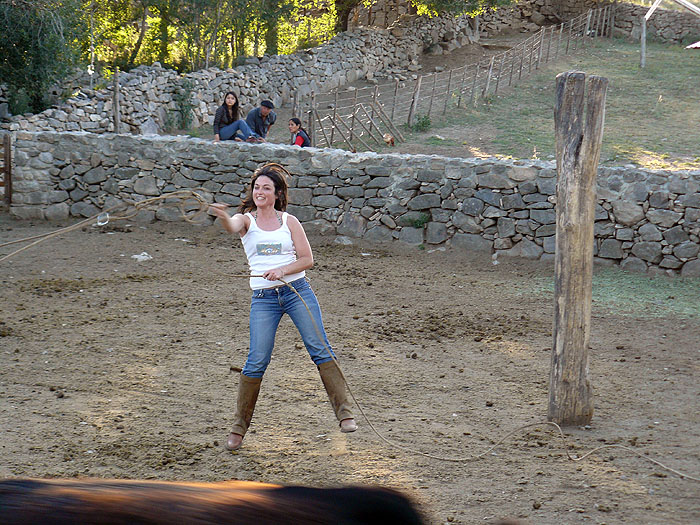 Fernando tacked up the horses - with sheepskin saddles. So much for the tough gaucho life. The heat of the day had started to dissipate and we were heading out from El Charabon, a 2,000-acre estancia - or ranch - in the department of Rocha, southern Uruguay. The wind was whispering through the eucalyptus and the landscape was bathed in a warm, early-evening light.

Uruguay, which won its independence in an 1828 treaty brokered by the British, is tiny. It has always acted as a buffer zone between Argentina and Brazil, its former ruler, and while it may not have the Andes or the Amazon, it does have gentle, rolling countryside of rich farmland, dotted with whitewashed ranches and gauchos herding cattle. It's perfect cowgirl territory.

El Charabon is owned by Jorge, a medical man, and Graciela. They are based in the capital, Montevideo - a three-hour drive down the coast - and bought the ranch as a holiday home, and a place to eventually retire to, 15 years ago. Pensions are low in Uruguay, Jorge told us over lunch - even for the country's head of anaesthesia. So they planned to supplement their income by farming eucalyptus, which is used to make paper.

Today, Jorge and Graciela also have around 650 Hereford cattle, 500 Hampshire Down sheep and 30 horses. They also take in guests - mainly from Europe - who want to ride, walk and go birdwatching, further boosting the farm's revenue.

Fernando, El Charabon's gaucho, is the real deal: tanned with a pointed black beard, leather chaps, knife at the waist, leather boots and hat. It's his job to take guests riding through the hills as well as looking after the stock.

Life can be tough for the modern-day gaucho. When Jorge met him in 2005 he had been working in the construction industry for years, as he had been unable to find work. Babysitting a few soft Europeans seems a small price to pay to be back on the land.

Our mounts had been worked hard all morning, so that they were calm. They were also palomino pensioners, as we wouldn't be able to handle the young horses.

As we attempted to round up our first herd of sheep - less One Man and His Dog and more Bridget Jones on horseback - Fernando sprang from his horse to grab one with a lichen-like smudge on its nose, trapping it between his legs as he reached for a bottle from his saddle and dabbed at the worms with antiseptic.

As well as working with the sheep and cattle, guests can go on an all-day trek to the coast - if they are good enough riders. It's a four-hour ride across three neighbouring estancias to the low-key fishing village of La Pedrer. The reward is a picnic and miles of dune-backed sand to gallop across, as well as crashing surf. The coast around here is wild and almost deserted.

When Jorge and Graciela bought El Charabon it was a ruin. Graciela added a wing here and a tower there until she had created a charming, sprawling ranch house.

Most of the guest ranches are in the south of the country, quite simply because there is more to see: the hiking trails and camping opportunities of Santa Teresa national park; the 18th-century fort at San Miguel (now a hotel); and the protected dunes at Cabo Polonia.

Our next stop, closer to the Brazilian border, was the Guardia del Monte ranch near the Castillos Lagoon. The landscape here is subtly different from the hills of El Charabon: it's more tropical, the open plains dotted with palm trees.

The colonial one-storey ranch itself dates back to 1785. It was originally a Spanish military post protecting soldiers on their way to the frontier with Portuguese-occupied territory.

Its rooms lie off a central vine-covered courtyard. Memorabilia on the walls includes the gauchos' boleodoras - three stone balls tied with string thrown, lassoo-like, to wrap around an animal's legs. In the kitchen stands a huge old Danish stove, salvaged from a shipwreck near Aguas Dulces on the coast in 1884. It is still used today.

The estancia's owners originally emigrated here from Italy to work as gauchos. They bought the land piece by piece. As with El Charabon, the main business of raising cattle and sheep is now supplemented by tourism.

The estancia overlooks wetlands, lagoon and forest - part of an important biosphere reserve. Wading on horseback through the shallows later with Sanguinetti, the ranch gaucho, we spotted black-necked swans, spoonbills, egrets, herons and storks.

A 15-mile stretch of the banks of the lagoon is also the site of the only ombú forest in the world. Ombú trees, which can live for 500 years, are found in Brazil, Argentina, Paraguay and elsewhere in Uruguay - but this is the only place where you will find more than one or two together.

Sitting down to dinner that night, Alicia, the owner, filled a couple of small glasses with licor de bulia, a deliciously sweet concoction made from the palm tree fruit. The thunderstorm that had cut short our ride earlier had also put paid to the asado (barbecue) and, we thought, our excursions for the day. However, we had not reckoned with Alicia's desire to show us every local curiosity.

Dressed in waterproofs, we followed her meekly through the mud. Up above were the stars; far below along the lagoon, a line of twinkling yellow dots. In November, fish swim up the Valizas River which connects the lagoon to the sea, in order to spawn. Then in February they return to the ocean, and the fishermen wait in lines to catch them at night.

As we were leaving the next morning, a film crew and minibus of models arrived from Montevideo for a fashion shoot. Everyone, it seems, wants a slice of gaucho life.