skip to main content
You are here: Home » Articles » Paraguay - Into the heart of South America 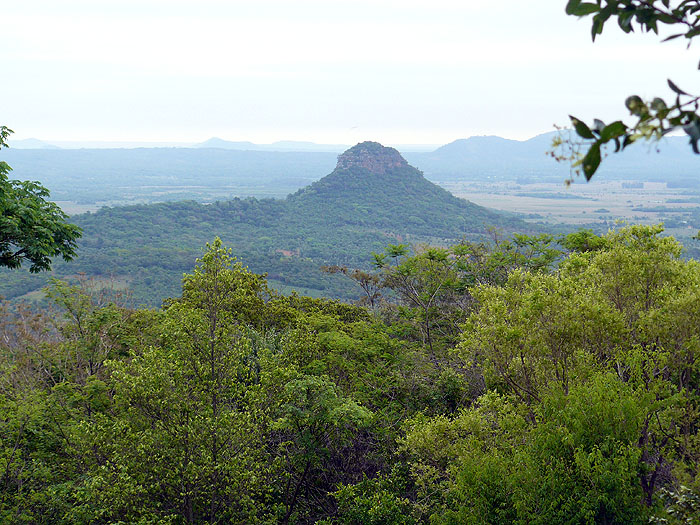 Paraguay - Into the heart of South America

In September, I was invited to Asunción to take part in a conference to promote tourism to Paraguay, one of South America's most overlooked countries. Landlocked and surrounded by the giants of South American tourism, Brazil and Argentina (not forgetting Bolivia of course!), Paraguay, economy booming, is now trying to develop its own visitor circuits. On paper, the country has huge possibilities such as the Chaco, one of the continent's last great natural wildernesses with un-contacted tribes and unique flora and fauna; vast tracts of virgin Pantanal; huge Jesuit ruins immortalised by the film "The Mission"; sleepy colonial towns with the remains of a 19th century rail network to name but a few. Unfortunately, I could only take in a small part of the country and so headed south.

The locomotive museum in Sapucay

After a few days in Asunción exploring the city and looking at the various hotel options, I headed into the Jesuit heartlands stopping at the impressive Yaguarón church en route to visit the missions of Trinidad and Jesus, Paraguay's most impressive ruins. The influence of this religious order upon Paraguay (and the surrounding countries) is huge and cannot be understated. Over a period of 150 years since their arrival in the early 1700's, the Jesuits dominated the region taming the landscapes and building a succession of stone-built missions to bring the indigenous Guarani indians under their care. In fact, so successful were the Jesuits that they were eventually expelled from the Americas in 1767; the economic might of the missions with advanced agricultural production coupled with huge indigenous manpower proving just too much for the (Catholic) colonial superpowers of the time.

The Jesuit ruins of Trinidad

Sitting on a hill with distant views over the surrounding countryside, the largest mission, Trinidad, remains an impressive site. Built out of local red sandstone which becomes darker and more atmospheric as the day progesses, the site is full of intricate carvings with ornate arches and figurines and well worth an afternoon. You may even like to stay in the village itself to enjoy the sound and light show that takes place each week - although not as cheesy as it might sound. Trinidad receives only a handful of visitors each day. Accommodation in Paraguay is a simple affair especially once you leave Asunción behind though there are a growing number of estancias where you can stay such as Estancia Tacuaty, surrounded by bucolic countryside a short distance away.

Following a brief visit to the mission of Jesús, we headed north-east following the Paraná River to the bustling city of Cíudad del Este on the tri-border crossing with Brazil and Argentina, just opposite the mighty Iguassu Falls. The drive itself was long and uninspiring and personally I would have preferred to cross the bridge from Encarnación into Argentina's Misiones province and then to drive up to the falls through subtropical forest stopping off at the San Ignacio Mini ruins en route.

Much of the tourism conference had focussed on the natural combination of Paraguay with Brazil and Argentina and Iguassu Falls as ever left us speechless, the perfect foil to Paraguay's more understated charms. A solitary night was not enough time to do the falls any justice though arriving in time to see the last rays of light catch on the water was truly magical!

Though I only barely scratched the surface, I found Paraguay to be one of the most intriguing and colourful countries in South America though more I hasten to add for its potential and fascinating history. From a tourism point of view, both the Paraguayan Pantanal and Alto Chaco remain a logistical nightmare while the Menonnite community who controls the central Chaco are only now opening up to tourism (one of our groups were given a guided tour of the local abattoir!). Even the southern routes which take in the Missions involve a lot of travel - time enough perhaps to brush upon the country's larger than life historical characters such as the dictator Francisco López and his Irish mistress Liza Lynch or the failed utopian colony of New Australia established at the end of the 19th century. Paraguay has some odd tales!

However, things are changing. Paraguay is a natural add-on to Brazil and Argentina and there are plans afoot to rejuvenate the original train line between Asunción and Encarnación. Access is easier than it used to be with Tam offering a daily service to Asunción via Sao Paulo and the infrastructure is improving on a daily basis.

Sounds good to me. Must take a return trip to South America before I get too old! Hope you and the family are well. Regards to all.
Comment by: Bob Moore on 23 Sep 2011 16:48