skip to main content
You are here: Home » Articles » Jonny in Ecuador and the Galapagos Islands 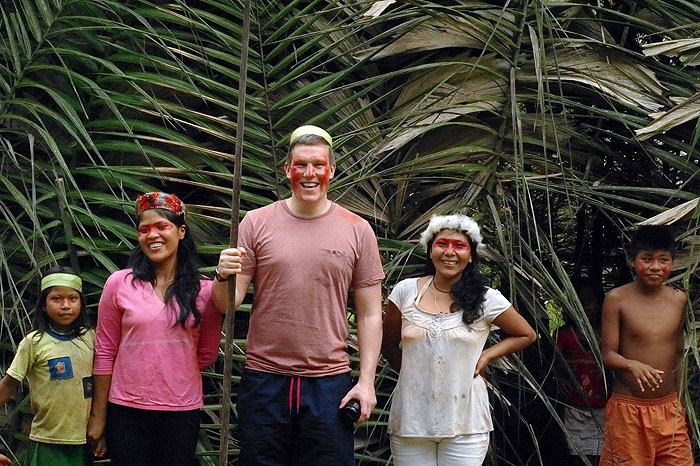 Jonny in Ecuador and the Galapagos Islands

I was fortunate enough to visit Ecuador and the Galapagos Islands for the second time in October, and although I previously visited on a whistle stop tour taking in a couple of sights, this time I had two weeks to really discover what this country had to offer.

My trip began with a visit to the northern market towns of Cotacachi and San Antonio, two hours north of Quito and famous for their leather and wood production. My first night was spent just outside the well-known town of Otavalo, well known for its animal market, where every Saturday, hordes of locals come to trade their livestock. The market itself is a rather surreal experience, as you push your way past baskets full of squealing cuy (guinea pig) and larger, more valuable animals such as sheep and cattle. During my time in the area, I stayed at Hacienda Cusin, family friendly with many activities on offer including riding, mountain biking and walking.

Viaduct on the Ibarra-Salinas line

From Otavalo I travelled further north to Ibarra, where I boarded the new tourist train to the small town of Salinas. The pace is leisurely, taking around two hours, and passing through steep valleys with ample opportunity for photos. Pulling into Salinas station I was greeted by locals dancing and beating drums to the local bomba rythmn, a form of music originally from Africa that has been adopted by the community and is synonymous with this part of Ecuador.

North of Salinas is the El Angel Ecological Reserve, a far less-visited part of Ecuador on the border with Colombia. The reserve spans 16,000 hectares from 3,400m to 4,700m, which combined with beautiful surroundings is quite breathtaking (in both senses of the word). Frailejónes, a velvet leafed plant (espeletia spp.) adapted to the low temperatures and high humidity, cover the surrounding hills, which are also home to spectacled bears and deers. There are various marked trails in the reserve, and a guide to explain the flora and fauna makes all the difference.

Quito stands at over 2,800m and is a UNESCO World Heritage site. Long and thin, the city is built in a valley and is flanked by the impressive Pichincha volcano. It is certainly worth spending a couple of days in the capital, not only to acclimatise, but also to explore the city's beautifully unspoilt old quarter (one of the best preserved in Latin America). For bird’s-eye views of the capital, a ride on the city’s cable car takes you over 1,000m above the city. Whilst here I visited the newly-inaugurated Casa Gangotena, one of the most exclusive hotels in Ecuador.

Travelling south from the capital along the panamericano (the highway spanning much of Latin and North America) we approached Cotopaxi volcano, one of the highest (5,897m) active volcanoes in the world. As in the northern highlands, the best way to visit the area is to stay in a hacienda. The cosy atmosphere of Hacienda El Porvenir is something that a hotel can’t replicate. With log fires burning in the rooms and ponchos given to guests, it’s a beautifully authentic way to experience Ecuador's central highlands.

Jonny and his new in-laws

I left Cotopaxi and waved goodbye to the thin air of the Andes, continuing south through the ‘Avenue of Volcanoes’ (a term coined by Alexander von Humboldt, a Prussian naturalist and explorer who travelled extensively through Latin America at the beginning of the nineteenth century), to the adventure town of Baños and onwards to the small town of Shell, named after the oil company and a gateway into Ecuador’s Amazon. I was visiting the Huaorani community, an indigenous group who inhabit part of the Yasuni National Park, an oil rich region whose habitat is severely threatened. The Huaorani are referred to as the 'warriors of the rainforest' and staying with them was an experience like no other, seeing and partaking in their way of life. Guests stay in simple guest huts built by the Huaorani, who also run the lodge, cooking all meals and guiding excursions themselves (you also have a translator with you). Although many would consider a visit to the Amazon as a chance to see wildlife, a stay with the Huaorani is instead a cultural experience. During my four day stay I learnt about their way of life and customs, including how they hunt using blowpipes and spears, how they can effortlessly climb trees over 30m high and how they can summon toucans and monkeys using leaves from the forest. Evenings are spent around the fire, listening to the stories of the elders and gazing at the stars above the forest canopy. The final day was spent visiting another local village called the Nenquipare, where I witnessed a Huaorani wedding, which involved lots of red face paint, chanting and dancing. It was a fascinating few days and completely different to my previous visit to the Amazon in Bolivia, which had been far more wildlife-orientated.

The coastal city of Guayaquil is the hub for many tourists travelling to the Galapagos. Far different to Quito, it is the economic hub of the country and an important port. Warm and humid throughout the year, the city has a fast-paced feel which is echoed by the local Guayaquileños. Although lacking the colonial charm of Quito, the city does have its attractions: the malecón (esplanade along the river front) has pretty gardens and is worth a stroll (it’s patrolled by police, so you do feel safe). The neighbourhood of Las Peñas, built on the Santa Ana hill at the northern end of the malecón, is home to colourful houses and cobbled streets.

My final destination in Ecuador was the wildlife haven of the Galapagos Islands. Just a two hour flight from the mainland, the archipelago can be visited year round and offers some of the closest encounters with nature you will ever experience. A cruise is generally the most popular way to visit the islands, however a number of good quality hotels have begun to emerge which means island stays are becoming more and more popular. This is also a good alternative for those who are concerned about sea-sickness. I was lucky enough to stay at the beautifully tranquil Galapagos Safari Camp, in the highlands of Santa Cruz island. Guests stay in spacious safari tents, which are built on stilts and have double beds, en-suite bathrooms and balconies - glamping as opposed to camping!

A fumarole near Sierra Negra volcano

Before my trip drew to an end, I took a short plane ride from Baltra (the main airport on the Galapagos) to Isabela, the largest island of the archipelago. The only habitation on the island is Puerto Villamil, most of whose small hotels front onto the white sandy beach which runs from one end of town to the other. Isabela felt far different to any of the other islands in the archipelago, there was a sense of freedom to explore on your own. During my first day on Isabela I hired a bike and visited both the giant tortoise breeding centre and El Muro de las Lagrimas, the 'Wall of Tears' (a wall built from volcanic rock by prisoners incarcerated on the island between 1945 and 1959). My final day on the island was spent visiting the Sierra Negra volcano, a short drive from Puerto Villamil and one of the largest volcanoes on the Galapagos. The excursion does require a guide, and it was really useful to have someone so knowledgeable telling you about the eco-system and formation of the islands.

Despite being one of the smallest countries in South America, Ecuador is one of the most diverse I have visited. From the Andes to the Amazon, the coast to the Galapagos Islands, the phrase ‘good things come in small packages’ couldn’t be more fitting when describing this gem of a country.