skip to main content
You are here: Home » Articles » In the jungles of Venezuela, the anaconda awaits (Simon Hacker) 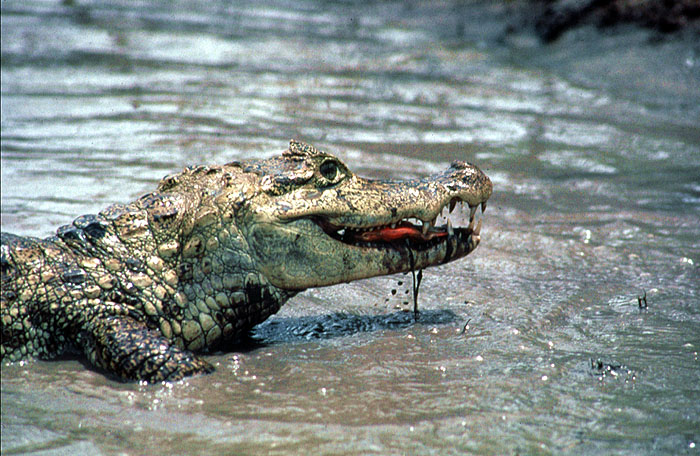 In the jungles of Venezuela, the anaconda awaits (Simon Hacker)

It can’t be much fun being Eunectes murinus. When you’re not being eyed up as a supplier for next autumn’s range of handbags, some macho tourist is hoping you’ll play a cameo role in his holiday snaps. No wonder they have a notoriously nasty temper.

Tourists and scary animals are getting increasingly cosy. When I was 10, our apex of adventure was the sticker on my father’s Cortina — “We’ve seen the lions of Longleat!”. Nowadays, you can swim with betusked narwhals, tickle tarantulas and hang out with surly gorillas. And somewhere at the gibbering end of the adrenaline scale sits this demented idea for a holiday.

First, some facts. The green anaconda averages about 20ft in length and, at a record 1,200lb, weighs in with the Guinness Book of Records as the snake supreme. The longest recorded example was shot in Brazil, in 1960, and measured just under 28ft. I was told to pack a wide-angle lens and leave the grappling bit to the guides.

Perhaps to conceal their black-and-yellow spots, or just because it’s so flaming humid, anacondas like to hang out just below the water line. However, trees can also be a favourite haunt, my guide Antonio Gomez tells me, just as we start to weave into a tagliatelle of branches and writhing roots.

We’re climbing the forest trail to the Angel Falls, which is every travel agent’s suggested serving of Venezuela. And quite right, too: visiting this country without witnessing the falls, in Canaima National Park, would be like going to the Po Valley and ignoring Venice. People come here to gawp at the world’s tallest water chute and, at 16 times the height of Niagara Falls, your first sighting is a true moment of skin-prickling excitement.

But with no convenient highway for hundreds of miles, the Angel Falls are no easy thrill. Once you’ve made the two-hour flight from Caracas, southeast to Canaima, the popular cop-out is to bag a 45-minute fly-by photo opportunity. Arguably, that’s a logical approach, given that the falls are named after Jimmy Angel, a prospecting nutcase who landed a light plane on the summit in 1936. The plane sank in a bog and he had to make the near-vertical descent on foot. His wife, who ’d unfortunately jumped in for the ride, was presumably not impressed: it took them 11 days to get back to civilisation.

I chose a different route: a 4.30am-start, a four-hour canoe ride, a two-hour mountain trek, the whole shebang in reverse and, come nightfall, legs like Bambi. It reads like a menu for misery, but I had been promised that it would be a much more meaningful option than flying. And to satisfy my own peculiar fixation, there was a chance of my first snake encounter.

ANACONDAS are rather partial to deer, but anything warm-blooded will do. Antonio reveals the fang-shaped scars on his arms and hands. He wears them like a badge; they are proof of past skirmishes where camera-wielding visitors got lucky. Before you spot one, though, he says, you may well smell it. To put it bluntly, they reek like a fish market on a slack day.

Not that you’d have much breath to tell. This particular brand of boa’s predigestive technique is to deck you with a hammer blow and then, while you’re thinking “Now, where did I pack that antihistamine?”, loop you in its infamous death curl. From there on, there’s no violence. It merely tightens each time you exhale, like some horribly misunderstood lover. When you’ve stopped breathing, but are still technically alive, it unhooks its jaws and eats you. Head first.

Only two tourists have died on this journey in the past few years, thankfully (maybe), from heart failure. It’s certainly not quite business class, piloting a coccyx-coshing 40 miles through white-knuckle rapids and on through two tributary rivers of the Orinoco. Deep in the Devil’s Canyon, a sweat-bath climb through the forest awaits, your goal being the point at which the water from the falls, most of it vaporised, lands on the mountain’s partially exposed midriff. Worst of all, you don’t even get knives and forks with your lunch.

What you do get is a moment of heady exhilaration. “Look up there,” Antonio laughs. I shield my eyes from the sun and cluck appreciatively at the waterfall’s absurd height. “No!” he urges, “Up THERE.” Silly me: the true summit looms higher still, well above the cloud layer. Like absurd fake scenery. I’m so amazed, I can no longer feel my aching feet.

Recovery awaits at Waku Lodge, back in Canaima village. It’s a luxury base camp with a treble soundtrack of macaws, toucans and yet more waterfalls. At night, their drumming can take on a threatening tone. It’s nature’s equivalent to sleeping on the hard shoulder of the M25, but you soon acquire waterfall ears. Come sun up, you might like to swim in that delicious-looking lagoon at the bottom of the hotel garden, but maybe not... though the hotel has a well-stocked medical box, the anacondas are closer than ever. Antonio shows me precisely where they like to linger on the sand, boosting their serpent batteries in the sun. I’m feeling increasingly less like a tourist and more like a Fed on the trail of a serial killer. And not a good one at that.

Punctuated by flat-topped mountains that gatecrash the clouds above, Canaima National Park has a malevolent beauty into which the anaconda wriggles perfectly. Tannins from the forests cause the water to run black and you could easily imagine some dinosaur looming up, under the next dark ripple. The Goliath bird-eating spider lives here, too. With a leg-span of 11 inches, it laughs in the face of plug holes. All in all, it’s little wonder Sir Arthur Conan Doyle came here to write The Lost World, his machete trail followed much more recently by film crews for Jurassic Park.

If you're a true snake twitcher, Canaima is mere foreplay. Sure, there are plenty of teasing clues, but there’s every chance, if you are somehow obsessed with seeking fork-tongued company, that you’ll leave with the anaconda box annoyingly unticked.

For full-on ophidiophobia, I was told to fly back to Caracas and switch Cessnas, heading southwest for Venezuela’s Los Llanos flood plain. As I was reliably informed, while Canaima has anacondas, Los Llanos is anacondas.

On the map, the journey looks simple enough, but be warned: while not quite totally run on the traditional mañana principle, Venezuelan domestic flight timetables are operated in apparent secrecy and, for the most part, characterised by prolonged periods of inactivity punctuated by intermittent spells of things nearly happening. So book your flights early, learn the Spanish for “Is this the right plane for Caracas?” and keep some Proust handy.

The vast Llanos flood plain has a rainfall chart that makes Manchester look arid. With 5ft of rain per annum and temperatures that can soar to 130F, its flora and fauna have gone into biological hyperdrive. On my first night at the Hato El Cedral ranch, a four-hour taxi ride from Barinas airport, I counted three different types of cricket, two rare spiders and a translucent frog. All in my shower tray. This is a bug-eat-tourist world, where ugly nocturnal dragonflies slide casually down the back of your neck while any square centimetre of untreated skin is instantly and ruthlessly located by mossies and midges.

But, boy, it’s exciting. On this ranch alone, some 20,000 cattle jostle for space among 14,000 capybaras, more than 250 bird species and 2,000 crocodiles — some of them car-sized Orinocos. But I’m here for the snakes. For our first morning’s hunt, Alex Nagy, the ranch’s wildlife expert, shows me his special anaconda-rousing equipment: a pair of Hunter wellies and a stout stick. We drive out along one of the levees that radiate from the farm and stop at a point where he’s recently spotted anacondas sidling up to a capybara and her plump clutch of young.

There’s no mystery to it. He simply wades out into the marshland and starts probing. I watch from dry land, berating my phrase book’s absence of a neat translation for that strangely appropriate Dad’s Army line, “They don’t like it up ’em”.

But really, they don’t. An hour’s probing later, something hisses among the water hyacinths. Alex waits as it heads away from the bank and, dropping his stick, grabs the disappearing tail, dragging the beast onto dry land. Ramon, his assistant, heads for the head and, approaching from outside its field of vision, pounces on the powerful jaw muscles. Not wanting to spoil my walking boots, I wait at a reasonable distance and fumble with my B&Q tape measure. Between us, we have a go at getting a rough measurement, but the wretched tape runs out at 10ft. It’s hard to tell with the thing wriggling around, but there’s at least another yard to go.

Still, it’s all the convincing I need. Alex says one measuring 18ft on the slither scale was recorded just days ago. It took three men to hold it down, so I’m glad it’s not the same one. At the given command, they jump away and “my” anaconda slopes resentfully back into the muddy water. In all the commotion, I realise I have failed again as a true tourist — my camera is still sitting in the truck. But I console myself with the thought that the scariest things are always slightly off-camera. And I’m happy. After all, I’m the one that got away.