skip to main content
You are here: Home » Articles » Green heart of a lost world - John Gimlette in Guyana 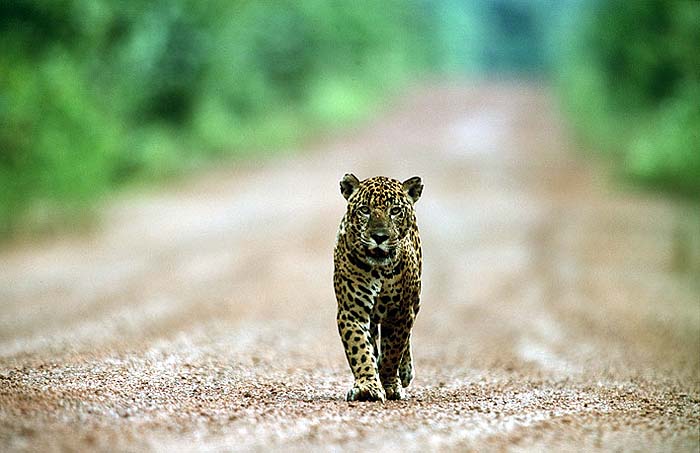 Green heart of a lost world - John Gimlette in Guyana

Fifty-eight miles from anywhere we stopped at a village called "58''. It was a pretty place, tucked into the lee of a forest the size of Britain.

Everybody had a pastel hut, a bicycle and a bow and arrows. We had horses once, they told us, but the jaguars ate them. Nowadays, 58 is best-known for its restaurant, probably the only one in central Guyana.
"What's for lunch?" asked my travelling companion. I felt a nip of anxiety. Until Guyana, Mark had been a five-star tripper. "Cutters and butterflaps," said the Indian mysteriously, "and wild cow." By which he meant tapir. Happily - as it turned out - a dead ringer for boeuf bourgignon.

I'm no longer surprised that 58 defined itself in terms of somewhere else, rather than what it was. Most Guyanese have settled down to a strong sense of dislocation. Only three per cent of them are aboriginal Amerindians; the rest are the remnants of slavery, revolts, Bengali migrations, Portuguese dreams and English adventures. Among the first of these adventurers was a distant ancestor of mine, a poet who arrived in 1628 and promptly succumbed to a "burning fever''.

Georgetown is the capital of this land of displaced souls. I've never known a place so light and airy. It is built on canals and breezes, a city of stilts and clapboard, brilliant whites, fretwork, spindles and louvres. The streets are as wide as fields and the cathedral seems to drift endlessly upwards, making it the tallest wooden building in the world. One area is even called Lacytown, as if at any moment it might simply take off and flutter away, home perhaps.

Somewhere among the riot of flamboyants and flags, I spotted Queen Victoria, staring stonily over her city. Even her most loyal subjects had let heat and fantasy go to their heads (the Town Hall looked like a dolls' house on the run), and everyone else had remained colourfully foreign. We found Hindu temples, Chinatowns, old slave markets, a Mexican circus (with real tigers), Baptists on a miracle crusade, and a "Festival of Extreme Chutney''. Even our guide found his city per-plexing. "I'm as greeen as graaaass," he confessed.

Beyond Georgetown, greenness was a different matter. Guyana is swamped by greens. Some parts are so green they've never been properly seen, lumps of green unclimbed and splats of green uncharted. Sir Walter Raleigh thought El Dorado was out there somewhere, but was disappointed. Guyana was just beautifully, dangerously green.

Several times, we took to small planes and flew over it. It looked like green sky below us. Often, our pilots followed the great rivers inland, until they forked, shattered and splintered into pools. Once, we swooped down on one of these rapidly deconstructing torrents, the Kaieteur Falls. Imagine a river the size of the Thames dropping from a ledge the height of the Post Office (now Telecom) Tower. Standing on the lip, it was like watching all the whisky in the world tumbling into an explosion of weather.

The only person who lived up here was Mr Gibson, who spoke Caribbean to his visitors and Latin to the plants. "Halyconia! Digitalis!" he announced gleefully, "and our local Viagra!" As we drove south, the greens changed. To begin with, they were merely colonial, vast rectangles of land dug and drained by slaves. It was a curiously Georgian world; cane was still cut with a cutlass, and the villages sounded like old sugar ships (Providence, Friendship and Supply). "Wanted For Larceny,'' said the posters, "Don Dick and Fineman.'' Even Mark, my travelling companion, was enjoying the shedding of centuries. From now on, we decided, it would be tasty saltfish for breakfast, damper for lunch, and dark rum at dusk.

Then we reached jungle, and the canopy closed overhead. For hours, our world was drenched in green and shadows. Occasionally, we stopped in this deafening, cackling darkness. That's the beetles screaming, said our guide, or toucans or macaws. Egbert was a Macuxi, who knew the forest like his larder. He found us letterwood for making bows, poison for arrows and salves for snakebite. Then, just as we were getting used to his green twilight, we found ourselves in sunshine and on the banks of the unruly Essequibo. "This is our Iwokrama," said Egbert, "our refuge from the Caribs." The wars now spent, Iwokrama had become a refuge for wildlife. Everything had ended up here; giant crabs in the hills; birds in a state of perpetual carnival; jaguars, sloths and howlers. At dusk, the river was skimmed by bats and the forest sparkled with fireflies. Naturally, we had ringside seats at this spectacle, in neat green huts. "The bathing is good too,'' read my guidebook, "but beware of sting-rays and caimans'' (so, not good really). It says much for the tranquillity of the place that I was soon in the water, splashing around among the carnivores.

Two days later we moved in with the Macuxi, in Surama. It was much as Evelyn Waugh had described it in 1932, huts scattered over a clearing. Many of the villagers had gold teeth, decorated with hearts and stars (to ward off the spirits), and most claimed descent from Mr Allicock, an English farmer.

Ovid and Sidney showed us how to use a bow, and we took a dugout down a well-toothed river. One afternoon, we marched through the forest and set up hammocks by the Burro-Burro. It was a beautiful, treacly evening, full of expectation and splashes. Why? Why? chimed dozens of frogs, as a bug the size of a lawnmower trimmed through the night.

After that, the horizons opened and we found ourselves on a savannah. This was the Rupununi, a vast sea of grass, thorns and lagoons. Cowboys here rode barefoot, and sandpaper grew on trees. The Guyanese have long-suspected the Rupununi of insurrection, but there were few people there. We stayed with Ovid's sister, who was married to an Englishman called Edwards. "Mr Colin'' had trained his little wilderness into immaculate rows: cashews, avocados, jackfruit and guestrooms. His "Rockview'' was quite unlike any other lodge I've stayed in; it had a library of weeviled classics, and the bar sold rum, bras and cutlasses.

But best of all was Karanambu, two hours away upstream. It was an odd voyage; our launch was trailed by giant otters and the banks blazed with birds; the Macuxi hauled huge piranhas aboard while the McTurks poured the punch.

There have been McTurks in Guyana since its earliest days. They've been planters, abolitionists, "Protectors of the Indians'' and ranchers. Over the centuries, they've even become vaguely Macuxi, living under thatch and enjoying bush food: tapioca pancakes, dried beef, wild honey and quince. The walls were hung with war-clubs and cartridge-fillers. There had been few concessions to the guests (showers, perhaps, and fresh sheets) and yet they still came back, year after year.

Nowadays, Diane McTurk is the ranch matriarch. "I was born here in 1932," she told me, "a wild child." I adored Diane. She was willowy, elegant, momentarily fierce and effortlessly charming. Not a consonant was out of place. She'd worked at Sotheby's in London and now rescues otters. There were two youngsters in residence, already eating like giants (a bucket of catfish a day).

On our last morning, I saw Mark swimming the river, festooned in otters. How many stars for Guyana? I wondered. Five, perhaps, for sheer rarity (less one for the fish breath).