skip to main content
You are here: Home » Articles » A new chapter in the jungle book (Nick Thorpe) 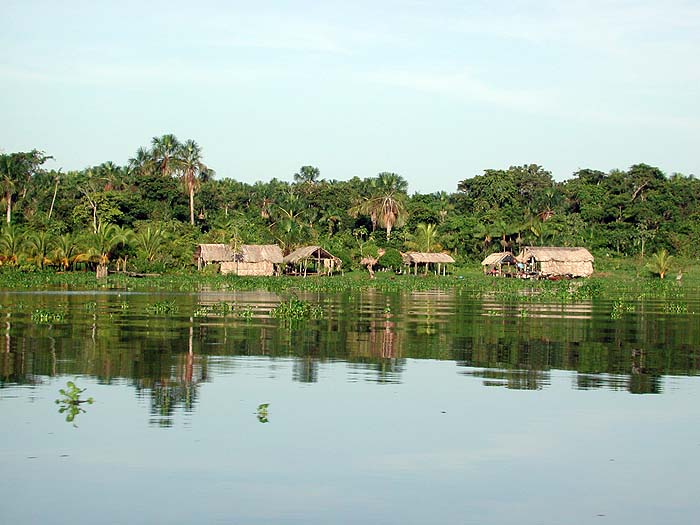 A new chapter in the jungle book (Nick Thorpe)

Over a smouldering fire in a small clearing on the forested banks of the Orinoco, Marco Martinez is roasting his new canoe.
"It took me three days to find the right tree," the Warao navigator tells me proudly, wiping a sooty hand across his forehead and leaving a streak like war paint. "I slept out in the jungle while I felled and hollowed it, then dragged it back here - now all it needs is five days in the fire."

Burning one’s boat has a different meaning in this remote corner of Venezuela, where the Warao - literally “canoe people” - have been paddling the labyrinthine waterways of the delta for thousands of years. The contact with fire strengthens rather than destroys. As long as the hot embers are not allowed to consume it, Marco’s newly carved dugout will open up like a ripe beanpod and expel its own moisture as the green wood turns hard and black and water-resistant.

Down at the river’s edge, two small children are peering shyly up at our group of tourists from the prow of another canoe that is tethered to the stilts of Marco’s waterside home. Their relaxed poise suggests that they feel safer on the water than on land - hardly surprising in children who learn to paddle before they can walk.

The Warao live afloat and die afloat, each canoe finally serving as a coffin that bears its dead owner - covered in flowers - on a final journey deep into the heart of the jungle. This much is as familiar as kinship to this peaceful race of fisherfolk. More novel are the pale faces of the foreign visitors.

"Until 10 years ago, nobody came here," explains Marco, who is 25, chuckling at his children's shyness. "My parents never saw tourists." So far, he's benefiting from the encounters: he gets to supplement their fishing income working at one of the jungle lodges a few miles upriver, while his wife sells baskets and hammocks.

Ecotourism, one senses, can have the same strengthening effect as the smouldering fire on his new canoe, but perhaps also the same dangers: you have to watch that you don’t end up destroying what you’re trying to protect.

"I have no problem with the visitors," he smiles. "As long as they respect our ways."

Chris Patterson, the Scots expatriate guide who has brought our group of half a dozen here, is aware of the need for balance in this fragile ecosystem, which spans 25,000 sq km of islands and waterways, and provides a home for 20,000 Warao.

"Some of them have always liked to trade with outsiders," he says as our boat pulls away, leaving Marco's palm-roofed house a solitary beige dot in the lush green foliage. "Others want nothing to do with us, and we leave them alone."

Ultimately, he hopes that limited eco-tourism on the fringes of the region might help raise foreign consciousness about other, less benign influences - oil prospecting in the east, and a reported rise in drug-trafficking along the maze of waterways - that threaten to bring the timeless ways of the Warao more abruptly into contact with the 21st century.

"I'm a realist," he says. "It's going to happen. The two cultures are meeting - like it's happening all over the world. I just want to make sure it's done well and with respect."

THE WARAO know better than most that nothing ever stays exactly the same. Their homeland has morphed and grown by more than 1,000 sq km in the past century alone, as vast quantities of silt form new land, pushing out into the Atlantic at a rate of 40 metres per year over its entire 360km coastline. The Caribbean island of Trinidad, only 15 miles away, could one day find itself part of the mainland.

Even the water seems to have a changing hue from the vantage point of our fibreglass launch. Watching a tapir foraging lazily on a fallen branch along one of the 300 narrow caños (channels), we notice that the flow is tea-coloured with tannin from plant mould; elsewhere it’s as black as oil; then we’re back in the wide and choppy Manamo River, mustard-coloured with sediment.

On the far bank, a troupe of red howler monkeys are feeding. “Never get underneath one of these, or you’ll discover their defence mechanism,” says Chris, as we watch them high in the lush riverside foliage. “Their shit is acidic and can blind you.” A solitary Warao fisherman, tucked under the overhang in a single canoe, looks unconcerned - but then he’s wearing a hat.

Continuing round a bend, we startle a flock of luminous scarlet ibis, which explode into flight against the backdrop of emerald. A cobalt-coloured morpho butterfly flounces past, its wings the size of cupped palms. Our boatman, Jorge, slowing to avoid a few free-floating bora plants whiskering the rippled surface, spots the surreal pink fin of a river dolphin surfacing for air. He stops midstream while a few of us dive in optimistically, hoping for a close encounter. The water is cool and green. Five minutes later, with a rum and Coke, we’re drying off as the orange sun dips below the canopy of trees.

Back at the Delta Lodge, the wildlife-watching is a little more hands-on. Dining out on a Warao-style stilt platform under peppered galaxies of stars, we’re interrupted during our main course of grilled river fish by a waiter bringing round his pet tarantula for communal stroking.

Escaping discreetly to the edge of the platform to hyperventilate, I’m further spooked to find that I can no longer see the water. Instead, a meadow of close-packed bora plants rustles slowly past like a conveyor belt as the salt tide of the Atlantic pushes inland.

As I wander back with my wife, Ali, along wooden boardwalks lit by kerosene lanterns, I can see only fireflies in the warm darkness, and, across the river, the solitary fire of a canoe-builder. We sleep in wooden huts with rustling palm roofs, and dream strange, pungent dreams.

WOKEN THE following morning by the roaring of howler monkeys, six of us clamber back into our launch and head further into the wilderness, following the retreating bora carpet towards the sea. Chris is keen to introduce us to a Warao family who can teach us some of the oldest traditions.

Occasionally, we pass small barges neatly stacked with pyramids of palm hearts, bound for the frontier town of Tucupita. A riverside shop on stilts displays hand-crafted beds and a tank of electric eels - sullen-looking creatures whose fat brown sluggishness belies their shock value. The scientist Alexander von Humboldt found this out the hard way when he trod on one during an experiment in Venezuela in 1800, and spent the rest of his day with violent pains in his joints. He never did answer his fundamental question: why don’t electric eels electrocute themselves? The Orinoco’s other less attractive occupants - including cayman, stingrays and piranha fish - are thankfully just as elusive and mysterious. So, too, are the occasional wrecked frames of an abandoned home, already half reclaimed by the jungle. “When someone dies, the Warao believe that the spirit of the dead person lives on in the house,” explains Chris. “They must move away.”

Leaving the main waterway, where children wave from occasional stilt villages, we dart into a new maze of channels - guided, thankfully, by the instinct of our Warao driver - in search of the family home of Antonio Moreno, a wise-looking patriarch with a deeply lined face, brown nylon trousers and a necklace cut from a cross section of nut.

Chris nods respectfully and gives the traditional gift of cigarettes, while Antonio responds by rolling an entire tobacco leaf, binding it with vegetable fibre and lighting it from the fire as a communal offering. We pass it politely round the circle, taking quick puffs of its sickly sweet, intoxicating smoke. To a younger man, Jesús, Chris gives a Swiss Army Knife. Jesús peers at it in some perplexity until he is shown how it works - at which point he laughs and thanks the white man.

"Now," asks Chris presently, with a reverential hush in his voice. "Can you show my friends how you make fire?" "Sure," says Jesús, equally politely. "Do you have a cigarette lighter?" When the uproarious laughter from the dozen other family members has finally died down, the men relent good-humouredly and we all set off into the jungle for a fire-starting lesson. Apparently, we're looking for "the tree of life".

The moriche palm, it turns out, is the Swiss Army Knife of the plant kingdom. It has an application for every situation. Its trunk can be used to build stilt houses, while its branches yield fruit, juices and a sweet pulp that can be made into a type of bread. The strong fibres torn from its fronds are woven into the Warao’s famous baskets and hammocks, and its trunk is used as an incubation chamber for a thumb-sized yellow beetle grub, the moriche worm, which is eaten live and squirming as a nutritious dietary supplement.

Not even the interests of cross-cultural understanding will induce me to try this. Instead we watch fascinated as Jesús and two of his brothers remove various parts of the plant with a machete to create a fire-starting kit - a shaft tipped with hardwood that can be spun quickly against a piece of bark until a thread of smoke emerges. It works on the third attempt.

Back at the stilt house, Jesús, Antonio and his brother bid us farewell with a strange musical recital. Each man takes a hollow cane with a smaller cane carefully inserted in the top like the mouthpiece of an oboe. After much collaborative wheezing and pitching and blowing bubbles into water vats to wet the reed, they finally produce a sequence of three notes in a minor key - one per instrument - a hypnotic, amplified mosquito buzz, repeated in a simple sequence, like a cross between a rave anthem and the motif used to make contact with the mother ship in Close Encounters.

It seems to strike everyone silent long after the final haunting note has ceased.

I can still hear it in my head as we scythe back along darkening green channels towards camp. I can’t help feeling that it signifies something more than the sum of its notes - the elusive key to an ancient culture.

Chris shrugs pensively at the suggestion. "Antonio just told me his grandfather taught it to him," he says. And perhaps, for an ancient people facing the amnesiac 21st century, that’s the most important answer there is.

Nick Thorpe travelled as a guest of Last Frontiers. He is the author of Eight Men and a Duck: An Improbable Voyage by Reed Boat to Easter Island, published by Little, Brown at £12.99.