You are here: Home » Nicaragua » Granada and Ometepe
Enlarge map 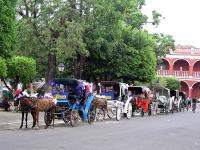 Granada was founded in 1524 and is the oldest city in the New World as well as being Nicaragua's most photogenic. It is a colourful colonial town full of character, with a number of fine churches and makes a great place to base yourself to explore the near-by sights.

The vast Lake Nicaragua is known for its freshwater sharks and 354 small isletas. Ometepe Island was formed by two volcanoes, Concepcion and Madera, rising up in the waters of the lake. Life on Ometepe revolves around the volcanoes and they play a dominant role in the myths and legends of its people. There is diverse flora and fauna and the history, as revealed by archaeological excavations, is fascinating.

means that the hotel is one of our Dream Destinations.

All hotels in Granada and Ometepe →