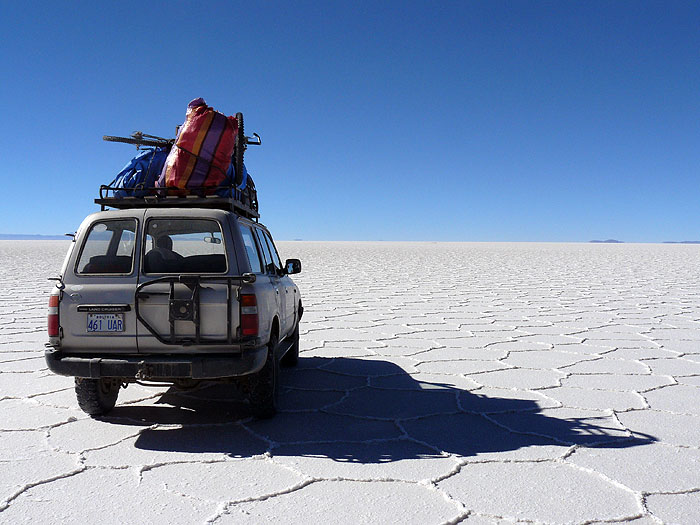 This 11 day itinerary takes in the highlights of the Bolivian Andes, from vibrant historical cities and sacred lakes to magnificent salt flats.

Days 1-2: La Paz is the world's highest capital. Built 3,600m above sea-level and nestled high in the Andes, it is famous for the Mercado de Hechecería (witches' market) and also has several fine museums documenting the country's colonial past. Spend two nights here taking time to acclimatise.

Day 3: The drive north to the small town of Copacabana, on the shores of Lake Titicaca, takes just under two hours, with a chance to visit the enigmatic pre-Inca site of Tiahuanaco (or Tiwanaku) on the way. Titicaca is the world's highest navigable lake and is considered sacred by the people who inhabit the area. A boat will take you to the remote and unique Sun Island, home to a number of small Inca sites, where you stay the night.

Days 4-6: Return to La Paz via the straits of Tiquina and the following morning board a short flight south to Bolivia's legal capital, the 'white city' of Sucre for two nights. This beautiful university town is famous for its colonial buildings and you can visit the nearby village of Tarabuco, with its lively Sunday market.

Day 7: A two hour drive south-west of Sucre is Potosí, just over 4,000m above sea-level. On the outskirts of the city is the Cerro Rico mine, once the jewel of the Spanish conquest, which helped to fund Europe’s industrial revolution. You will visit the country's first mint (the Casa de Moneda) and it is also possible to visit the mine itself, where an estimated 8 million native people lived and died throughout its tragic 300 year history.

Salt flats and the southern deserts

Days 8-10: You will be driven, along winding Andean roads, to the small town of Uyuni, and begin a three night guided 4x4 overland adventure through the Salar de Uyuni and Andean plateau, visiting Isla Pescado, the Chiguana desert, pink flamingos at Laguna Hediona, the coloured rock formations of the 'Salvador Dali' desert and Laguna Verde. The final night is spent at a salt hotel on the edge of the salt flats.

Day 11: Fly from Uyuni to La Paz for onward connections. 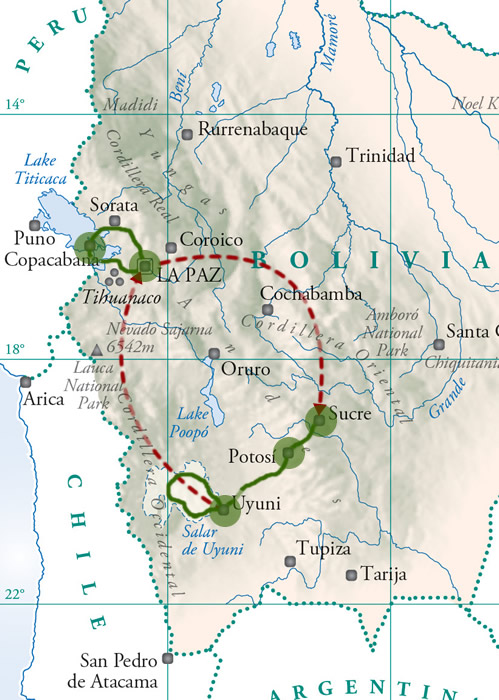 The estimated flight cost included in this itinerary (assuming international flights from the UK plus any internal flights that are necessary) is £1,460 per person.

As a fully bonded and very experienced Tour Operator, we can help you plan and book your perfect trip to Bolivia.