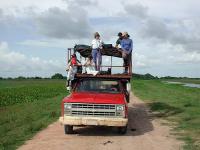 Near Mantecal in Apure state (the low Llanos), is the 55,000ha ranch of Hato Cedral. Formerly owned by King Ranch (originators of the Santa Gertrudis breed of cattle). The capybaras on the entrance road are probably the tamest in Venezuela!

Wildlife observation and birdwatching. There are customised lorries for the twice-daily excursions around the savanna, boats for the wet season, and you can see a lot just walking near the buildings. At Cedral there are over 250 species of birds (including macaws, herons, storks, ibis, hoatzins and flycatchers); nearly 50 mammal species (including jaguars, pumas, ocelots, white-tailed deer, crab-eating foxes, capybaras, red howler and capuchin monkeys, opossums, ant-eaters, armadillos and river dolphins); and over 40 species of reptiles (including spectacled caimans, green iguanas, anacondas, turtles and red-footed tortoises). The capybaras on the entrance road are probably the tamest in Venezuela!

All rooms have en-suite bathrooms and air conditioning, and there is a small pool.

If you are interested in wildlife then the Llanos is a fascinating destination. Cedral is one of the most comfortable and well organised ranches.

During the dry season from December to April, although it is open all year and still impressive in the wet season (from June to October) when the savanna is flooded.