skip to main content
You are here: Home » Botany of Brazil and Argentina

Botany of Brazil and Argentina

with the curator of Oxford's Herbaria

24 August - 3 September 2021: Victorian England went mad for exotic New World plants and this trip will show why, in a journey through the botanical delights of Rio, Iguassu and Buenos Aires.

Tuesday 24 August 2021 - Arrival day (Rio): For UK participants, the recommended non-stop flight from London Heathrow with British Airways departs around midday and arrives in Rio de Janeiro around 8pm. Other flights can be met on request.

While Brasilia is the official capital, Brazil’s spiritual capital is Rio de Janeiro, with surely one of the most beautiful settings in the world. The Corcovado and Sugar Loaf mountains overshadow the city and the beaches include famous Copacabana and fashionable Ipanema.

Stay 3 nights at the Hotel Windsor California (on Copacabana beach).

Spend a full day exploring Rio’s 100-acre Botanic Gardens, founded in 1808 to breed foreign plants (mainly spices from the West Indies) but today at the forefront of the conservation of Brazilian flora. Apart from the 6,500 plant species, 140 species of birds have also made the gardens their home. The gardens have a fascinating history, as Stephen Harris will explain.

Petrópolis is close to the Serra dos Órgãos national park, 70km north of Rio. It is also known as the Imperial City as it was the summer retreat for the Brazilian emperors and wealthy residents in the 19th century. The city has some beautiful historic buildings, fascinating museums and pretty public parks.

Drive up to Petrópolis, and stay 2 nights at the colonial Hotel Casablanca Imperial, right next to the Imperial Palace. Visit the museum and gardens designed by Jean Baptiste Binot in 1854, and a spectacular private garden nearby.

The river Iguaçu emerges from forested banks to plunge over a series of cliffs and create a breath-taking spectacle, higher than Niagara and wider than the Victoria Falls.

Fly from Rio to Foz do Iguaçu, and spend 2 nights at the Hotel San Martín.

After admiring these spectacular waterfalls, one of the natural wonders of the world, from the Brazilian side, explore the trails in the sub-tropical forest which surrounds the falls.

On the final day cross the border to Argentina for a close-up and contrasting view from the extensive network of pathways, before taking a flight to Buenos Aires.

Buenos Aires and the pampas

Argentina's capital is a cosmopolitan city, often referred to as the Paris of South America, with fine hotels, shops, and colonial buildings. On the banks of the River Plate estuary, the city is laid out on a grid system, with some spectacularly wide avenues. Different parts of the city have quite distinct flavours, from La Boca (where some of the oldest buildings are to be found, many brightly painted), Calle Florida for shopping, to the Plaza de Mayo with its 'Pink Palace', the president's residence, cathedral, and town hall.

Take a city tour including iconic buildings and monuments such as the Casa Rosada (presidential palace),  elegant Recoleta district (famous for its cemetery with ornate mausoleums including that of Eva Perón), and the colourful streets of La Boca. View the city’s most interesting parks and private gardens, and visit a traditional estancia on the pampas and enjoy a typical asado (barbeque).

Transfer to the airport for homeward or onward connections. A non-stop British Airways flight to the UK departs around 2pm, arriving at 7am on 4 September.

Prices start at £5,340 per person sharing a double/twin room, including internal but not international flights. Do contact us for availability, flight quotes, and booking conditions.

The trip scholar is Professor Stephen Harris, latest in a long line of distinguished curators of Britain’s oldest plant collection and frequent visitor to Brazil. See our trip scholar pages for further details.

The outline presented here was accurate when produced in June 2020 but we may need to add or omit visits; alter the length of stay in each place; or change routings to make the best connections. We reserve the right to substitute the trip scholar if they are unable to travel for reasons outside our control. 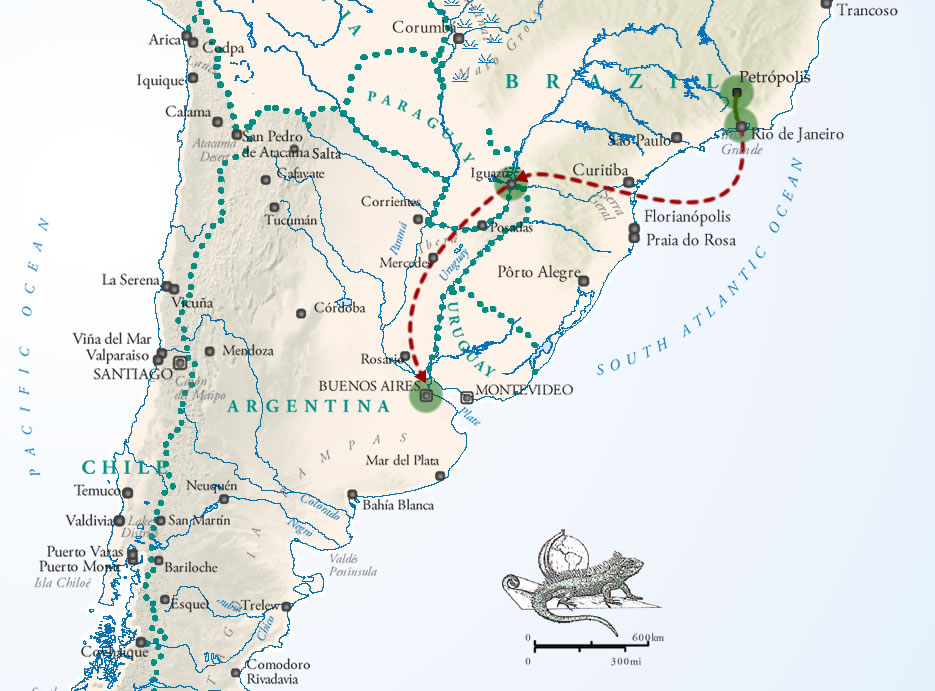